The way to build a smarter, connected world

5G connections aim to reshape the technology of our daily lives. 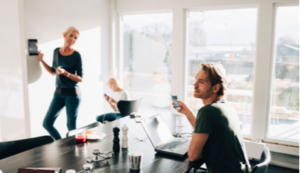 These and other technologies that rely on intelligence from the internet are exactly what technology leaders have in mind as they build 5G, the next generation wireless network set to become available by 2020.

This 5G technology is not just for smartphones, according to Robert Topol, general manager of Intel’s 5G Business and Technology. He said 5G is designed to be smarter and better performing than current 4G technology, so it can bring communications, computing and artificial intelligence closer to our daily lives.

“5G is not just the next G,” said Topol. “It’s about handling more data, whether it’s from a refrigerator, washing machine, vehicle or flying drone.”

This technology could blur the lines between the spaces we use for work, home and play, he said. It has the potential to bring a new era of interconnectedness, where cars, industrial automation and new augmented and virtual reality experiences will rely on a robust wireless network.

According to research firm IHS Markit, the number of devices connected to the internet will reach 20 billion this year, 30.7 billion in 2020 and more than 75 billion by 2025.

“There will be billions of devices and billions of connected things coming onboard in the next five or six years. Over time, 5G will make things smarter by connecting them to yet more computer-powered intelligence.”

Topol said 5G is not only about broader broadband, it’s about low latency, reliable communications and handling machine-to-machine communication.

“I find it very difficult to imagine that technology itself will replace judgement, but at the same time I think that the best judgement is a judgement that is better informed”.

“You’ll be able to download even a 4K video in a second or two, as opposed to waiting minutes to download a full movie,” she said.

The breakthrough could open up new entertainment experiences and coverage of live events. e technology is being tested now, but the 2020 Tokyo Olympics is slated to be the first true showcase for 5G technology, said Darrell West, director of the Center for Technology Innovation at the Brookings Institution.

“The Japanese see that as a great opportunity to incorporate new approaches to covering sports events,” West said. For example, spectators could use their mobile devices to watch an event from different vantage points—switching among a player’s camera-mounted helmet, a bird’s eye view from above, and a traditional side-on view. When a spectator points a phone at a player, augmented reality (AR) could be used to display a short bio of the player superimposed on the screen.

“5G will allow a full stereoscopic view, a mix of virtual and augmented reality, and an ability to share that experience with others—whether they are in the next room or halfway around the world,” Topol said.

Innovative wearable and remote care technologies that connect to wireless networks can benefit from 5G networks. One example might be a soft robotic finger—piloted by the UK’s National Health Service at the Centre for Robotic Research at King’s College in London—that physicians can use to remotely examine a patient’s abdomen. MacGillivray said the device allows doctors to palpate tumors and diagnose based on haptic feedback.

With the development of autonomous, or self-driving vehicles, safety is also an important factor and early applications will leverage new technologies built into 5G while also helping to make smart car technology more accessible.

Although some cars are currently semi-autonomous—many high-end models come with automatic braking, a crash-prevention technology that automatically applies the brakes when the car approaches an obstacle at an unsafe speed— such capabilities will expand quickly over the next several years. Automatic braking has already started to appear in less expensive models of driverless cars.

“The network will become faster, the latency less and the machines able to talk to each other more,” Topol said.

How tech offers a faster path to sustainability

The CEO’s guide to cybersecurity

How to build a bridge across the digital divide

The next generation of climate innovation

3 predictions for the future of responsible technology