The numbers behind Prime Day

Prime Day — the holiday manufactured by Amazon — has become one of the biggest shopping events of the year.

Nearly seven in 10 US consumers who plan to shop during Prime Day—taking place July 15 and July 16 this year—will look outside of Amazon to comparison shop, according to a survey conducted by marketing technology and analytics agency Adlucent. Of those planned comparison shoppers, half will consider Walmart (50%), but Target (33%) and Best Buy (32%) are also popular options, while 31% plan to comparison shop elsewhere.

If more than half of these shoppers look for deals elsewhere, there will be many opportunities for alternative retailers to cash in, as long as they offer the right products at a competitive rate. Walmart is hoping to get ahead of the competition by starting its three-day sale on July 14, one day before Prime Day begins. Target’s “Deal Days” sale will take place in the same 48-hour window as Prime Day. And marketplace competitor eBay has announced that its “Crash Sale,” which pokes fun at Amazon’s Prime Day website crash in 2018, will take place on July 15.

Last year, RetailMeNot found 194 retailers got in on the Prime Day action by offering some kind of related promotion, and they expect that number will reach 250 this year. According to an August 2018 survey from A.T. Kearney, 40% of US Amazon Prime Day buyers bought from other retailers on Prime Day, while 25% browsed other sites for competitive offers without making a purchase. Among those who shopped at other retailers, most made purchases at Walmart (21%) or Target (20%). 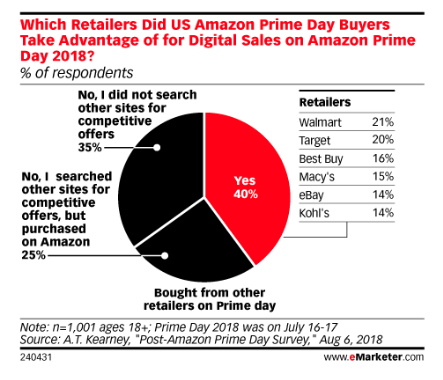 Not surprisingly, price was the main factor for Prime Day buyers to purchase elsewhere, per A.T. Kearney. One in five respondents went with an alternative retailer because its price or promotion was better than Amazon, and 17% said the price or promotion matched the etailer giant. 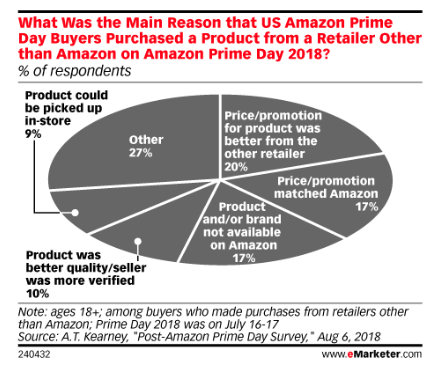 But other factors—the availability of a certain product, more reliable sellers and the ability to buy online, pick up in-store—also led Prime Day shoppers to shop elsewhere.

How governments can solve the EV charging dilemma

Natural gas prices are soaring. Here’s why the U.S. may not suffer from the rise.

Here’s what high cotton prices mean for retailers and consumers