The age of the machine is here

The truth is we have only scratched the surface of what Artificial Intelligence is really capable of.

Artificial Intelligence (AI) is a topic that can be very divisive.

On one hand, you get the AI enthusiasts who cannot imagine a future without AI. On the other hand, you have those who are concerned that AI is advancing too fast—they feel that we may not have a future if machine learning advances so much that we can’t control it. Which is correct?

Only time will tell for sure, but I tend to think that it will be somewhere in the middle. The truth is that AI is still a nascent technology, so we’ve only scratched the surface of what it’s capable of. It will be interesting to see what developments we might see in the future.

In the end, the argument might be somewhat pointless.

AI has advanced extremely fast over the last decade or so. The concept itself is nothing new—the Turing Test, the gold standard today for testing whether a machine can pass as human, was first developed in the forties.

Back then, the technology that would make true machine learning possible wasn’t available. Fast forward to today, with our much more advanced technology, and the idea of a self-aware android is not as sci-fi as it might have seemed in the post-war era. We also have a lot of platforms that make it simple for developers to train their programs to do the tasks that they want them to. In short, “intelligent” technology has never been more accessible.

One thing that most of us need to get over is our fixed ideas of what AI is.

The movie character, the Terminator, was an example of AI being put to use. But, as you’ll see from the infographic below, there are a lot of applications already using AI and a good few more in the pipeline.

AI is present in many of the everyday items that we take for granted. Without AI, your car’s GPS system would be unable to find the best route to your destination. Without it, you wouldn’t get very accurate results when you Googled something, and you’d have no virtual assistants to help you navigate the web or perform basic tasks. For example, companies like Twitter have been using big data and AI for quite some time now. 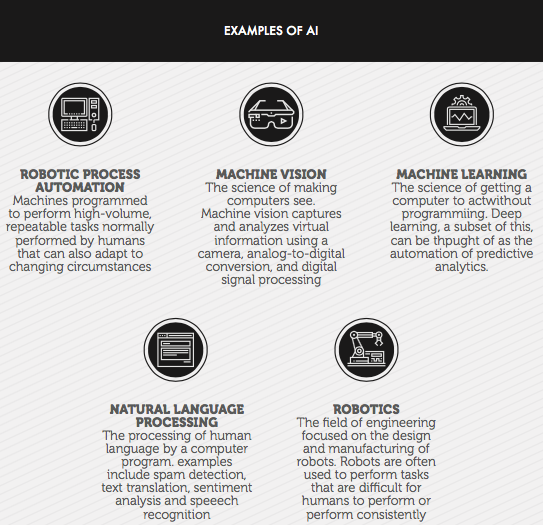 Neither good or bad

It also pays to realize that AI, at its core, is neutral. We see movies in which robots try to take over the world because they hate mankind. The truth is, though, that AI is computer programming.

It’s not capable of the same emotions that humans are. So, if the machines do ever decide to destroy humankind, it’s more likely to be as a result of a logical decision-making process, rather than based on pure hatred. I’m not saying that there is no danger that machines might decide to wipe us all out, but rather that machines wouldn’t be motivated to do so for the same reasons that humans might.

AI has already started changing the world as we know it. The fact that it will transform it even more in the future is clear. We don’t know how much, because only time will tell.

*Muninder Adavelli is an engineer, ardent student of human-computer interfaces, and Chief Content Strategist at TechJury.net.

The call to act: Women in alternative investments

Why we can’t predict the future of business, but we can foresee it better

The top 10 technologies for business transformation