Asia is on track to top 50% of global GDP by 2040, representing a real shift in the world’s center of gravity.

For years, Western observers and media have been talking about the rise of Asia in terms of its massive future potential. But the time has come for the rest of the world to update its thinking—because the future arrived even faster than expected.

One of the most dramatic developments of the past 30 years has been Asia’s soaring consumption and its integration into global flows of trade, capital, talent, and innovation. In the decades ahead, Asia’s economies will go from participating in these flows to determining their shape and direction. Indeed, in many areas—from the internet to trade and luxury goods—they already are. The question is no longer how quickly Asia will rise; it is how Asia will lead.

Of course, it is hard to generalize about such a vast swathe of the world, spanning myriad languages, ethnicities, and religions. These nations have widely varying forms of government, economic systems, and human-development indicators. Some have young and growing populations, while others are aging. Annual per capita income ranges from $849 in Nepal to $57,714 in Singapore. The region encompasses ancient ruins and bullet trains, rural farming villages and towering skyscrapers.

“Urbanization is fueling economic growth and opening doors to education and public health services. But pockets of poverty and real development challenges remain. The breakneck pace of growth has left many cities struggling to provide the housing, infrastructure, and other services that their surging populations need.”

The common thread across this diverse region is an upward trajectory across key economic and social indicators. In 2000, Asia accounted for just under one-third of global GDP (in terms of purchasing power parity), yet it is on track to top 50% by 2040. By that point, it is expected to account for 40% of the world’s total consumption. At the same time, Asia is making not only economic progress but rapid strides in human development, from longer life spans and greater literacy to a dramatic surge in internet use.

The region’s rise has not only lifted hundreds of millions out of extreme poverty; it has also raised living standards more broadly for people of every income level. Urbanization is fueling economic growth and opening doors to education and public health services. But pockets of poverty and real development challenges remain. The breakneck pace of growth has left many cities struggling to provide the housing, infrastructure, and other ser- vices that their surging populations need.

Countries across the region need to achieve more inclusive and sustainable economic growth to address inequality and environmental stresses.

Recent McKinsey Global Institute (MGI) research examined 71 developing economies and singled out 18 of them for consistently posting robust economic GDP growth. All seven long-term out-performers, and five out of 11 recent out-performers, are located in Asia. In recent decades, several Asian countries have propelled themselves into the ranks of middle-income and even advanced economies. This reflects the region’s ongoing industrialization and urbanization, its rising demand and productivity growth, and its dynamic corporate sector.

These trends represent a real shift in the world’s center of gravity. Scholar Parag Khanna asserts that the “Asian century” has begun and observes that the region’s rise is not cyclical but structural. Emerging Asia’s evolution has reached a stage that requires deeper global acknowledgment. It is upending assumptions—long held in the West, in other emerging economies, and even in Asia itself—about the world’s economic balance.

The paper in question provides an overview of Asia’s role in four areas: trade flows and networks, corporations in Asia, technology, and the Asian consumer. MGI will return to each of these topics with more extensive stand-alone research reports in the months ahead. Yet combining these perspectives, as we do here, provides a wider view of how the region is evolving—and a hint of how it might define the future.

Recent MGI research examined 23 industry value chains spanning 43 countries and documented major structural shifts in the world’s trade patterns. Asia is at the center of many of these changes, and its companies will continue to respond to them in the years ahead. Over the past decade, global output has continued to rise but the share of goods traded across borders has fallen by 5.6 percentage points. This decline does not reflect trade disputes or hint at an impending slowdown. Instead, it reflects healthy economic development in China, India, and the rest of emerging Asia.

As consumption rises, more of what gets made in these countries is now sold locally instead of being exported to the West. Over the decade from 2007 to 2017, China almost tripled its production of labor-intensive goods, from $3.1 trillion to $8.8 trillion. At the same time, the share of gross output China exports has dramatically decreased, from 15.5% to 8.3%. India has similarly been exporting a smaller share of its output over time. This implies that more goods are being consumed domestically rather than exported. Furthermore, as the region’s emerging economies develop new industrial capabilities and begin making more sophisticated products, they are becoming less reliant on foreign imports of both intermediate inputs and final goods.

The previous era of globalization was marked by Western companies building supply chains that stretched halfway around the world as they sought out the lowest possible labor costs—and often their supply chains ran through Asia. Now labor arbitrage is on the wane. Only 18% of today’s trade involves exports from low-wage countries to high-wage countries—a far smaller share than most people assume and one that is declining in many industries.

The examples of China

Labor-intensive manufacturing for export was a major engine of China’s rise, and it has historically been the clear path to economic development for poor countries. However, opportunities to compete on the basis of low-cost labor are narrowing as wages rise across the region and as automation technologies are adopted more widely.

For some in the region, the window is not closed yet. As wages rise in China and the country moves into higher-value activities, its share of global exports of labor-intensive goods has declined by three percentage points. This has created an opening for other countries to step in. In the past decade, Vietnam, India, and Bangladesh have managed to grow their exports of labor-intensive manufactured goods (particularly textiles) by annual rates of 15%, 8%, and 7%, respectively (Exhibit 1). This trend can turn unknown cities into new manufacturing hot spots.

Nevertheless, infrastructure, workforce skills, and productivity will be critical to competitiveness in the decade ahead. Low-cost labor alone will not be enough. All industry value chains now rely more heavily on R&D and innovation—and the share of value generated by the actual production of goods is declining. These shifts, combined with a wave of new manufacturing and logistics technologies, mean that countries across Asia will need to alter their investment priorities and develop new types of skills to compete in a more knowledge-intensive trade landscape.

Companies are increasingly focused on speed to market and improving coordination and visibility across the entire value chain—goals that are hard to achieve when suppliers are halfway around the globe. As a result, supply chains are becoming shorter and more localized. Intra-regional trade is increasing at the expense of long-haul trade. 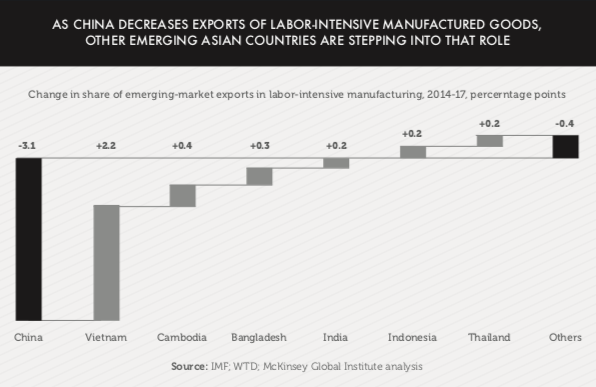 Because of its diversity and geographic sweep, Asia is not and likely will never be the same kind of tightly integrated trade entity as the European Union or NAFTA. Yet although it is a looser constellation of countries, trade ties and cooperation are deepening across the region. Today, 52% of Asian trade is intra-regional, compared to just 41% in North America. This points toward a new trend of firms building self-contained regional supply chains to serve Asian markets. It also indicates deepening trade ties among Asian countries themselves—with much more room to grow. The Regional Comprehensive Economic Partnership (RCEP) is a new free trade agreement that includes 16 countries across the region, including China, Japan, India, and Vietnam.

While trade in goods has flattened, service flows have become the real connective tissue of the global economy. In fact, services trade is growing 60% faster than trade in goods—and Asia’s services trade is growing 1.7 times faster than the rest of the world’s. While India and the Philippines are among the biggest exporters of back-office business services, trade in knowledge-intensive services is still in its infancy across most Asian countries and represents an important gap to be filled.

Steel Imports Down 23% In February vs. January

Energy Fact Sheet: Why Does Russian Oil and Gas Matter?

Conference Board: US Consumer Confidence Up Slightly

How Soaring Shipping Costs Raise Prices Around the World