According to CNBC, the robotaxi has a few features that set it apart from rivals like Alphabet’s Waymo, GM’s Cruise, Uber and Tesla. It has bidirectional driving capabilities and four-wheel steering, which allows it to change directions without the need to reverse and navigate in compact spaces. An array of cameras, radar and lidar sensors are mounted on all four corners of the car, eliminating “typical blind spots” and giving it a 270-degree field of view on the road. The car can travel up to 75 miles per hour and can run up to 16 hours on a single charge. It’s also equipped with an airbag system on all four seats.

Zoox was founded in 2014 with a vision of purpose-built, zero-emissions vehicles designed for autonomous ride-hailing, along with an end-to-end autonomy software stack. The company was acquired by Amazon in 2020, and operates as an independent subsidiary. Zoox is currently testing in Las Vegas, San Francisco, and Foster City.

“Safety is the foundation of everything we do. Building a vehicle from the ground-up has given us the opportunity to reimagine passenger safety, shifting from reactive to proactive measures,” said Jesse Levinson, Zoox Chief Technology Officer and Co-Founder. “These include new safety features such as our airbag design, redundant hardware throughout the vehicle, a unique sensor architecture, and a custom AI stack that detects and mitigates potential risks. Our vehicle has passed key FMVSS crash tests, and we are continuing to look for new, innovative ways to protect our riders and others on the road.” 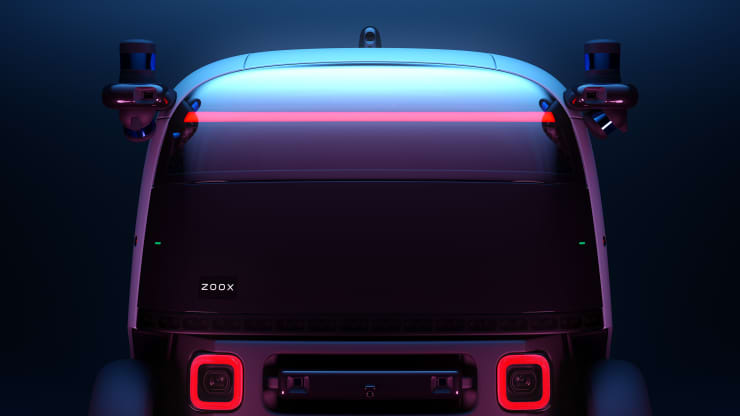 Apple Raises Pay for U.S. Workers to $22 Per Hour