When Charlie Gamba and a group of associates founded Canacol Energy in Colombia in 2008, they intended to grow the young oil and gas exploration and production company to a certain size and then sell it on to one of the aggregators that were operating in the region at the time—larger companies that were growing very quickly by acquiring smaller companies.

Yet, unknown to them, the global financial crisis was just around the corner, followed by the oil price crash of 2014, and this would force Canacol to drastically rethink their strategy and business model. Against the odds, they succeeded.

“I founded the company at a time when Colombia was a very attractive destination with respect to investing in the oil and gas sector,” Gamba told CEO Magazine in an exclusive interview. “The sector had recently been deregulated and a lot of exploration bid rounds had occurred, and a lot of foreign entrants, especially from Canada, entered Colombia to start looking for oil and gas exploration and production opportunities. I was basically on the tail end of that curve, when the investment climate was very robust. There was a lot of risk capital available in the markets, particularly in Toronto, to invest in startups in Colombia.”

Gamba already knew the ins and outs of the Colombian oil and gas market, having served as Vice President-Exploration for Occidental Petroleum and president and CEO of Brazalta Resources prior to founding Canacol, yet shortly after he got the latter company up and running, global events would conspire to present Gamba with an unprecedented challenge.

“Just after we got our first set of production assets here, we ran into the financial crisis of late 2008 where the markets collapsed,” he explained. “As a result, we had to reprogram our plan, take a lot more care with respect to the deployment of capital, and reduce our operating footprint.”

As a result of the chaos, Canacol would end up becoming a very different company to the one it started out as, deciding to leave behind oil production to focus exclusively on natural gas and completely restructure its business model. A key factor in the decision was the oil price crash of 2014 in which prices per barrel plummeted from $115 in June 2014 to $35 in February 2016.

“We started out really focused on oil and moved into gas in 2012 to balance our portfolio,” Gamba explained. “Later, we made the strategic decision to acquire gas assets in northwestern Colombia, specifically in the Lower Magdalena Valley Basin. What was of particular interest to us was the running room—the remaining exploration potential on the lands, which we have recently supplemented with a further acquisition of prospective acreage that surround the original lands we picked up in 2011.

“With the collapse of the oil market two years later, all our spending was directed towards gas drilling and now we’re basically a pure gas company. The opportunity is in the growing demand for natural gas in Colombia. We have secured a number of contracts, primarily to sell gas to thermoelectric power generating utilities, but also to local mines, which use gas as a fuel source to power their operations.” 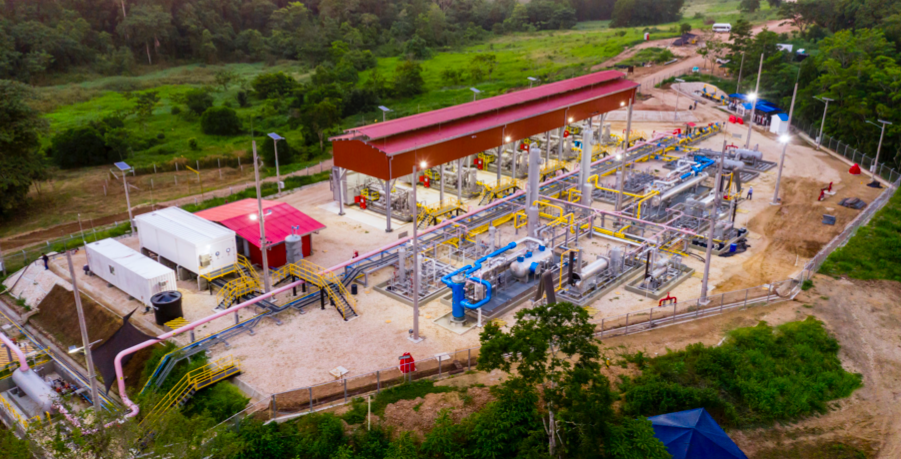 Gamba says that several important decisions were taken as Canacol sought to restructure in the wake of the financial problems afflicting the energy sector.

The company gave up its assets in other Latin American countries, such as Ecuador, Peru, Brazil, and Mexico, and instead focused all its efforts on Colombia. Gamba also looked towards refining the company’s financial model as a way of protecting it against future fluctuations in commodity prices.

“We’ve really refined our business model in terms of focusing geographically and in terms of a commodity focus on gas; as well as hedging on commodity prices to ensure that future cash flow streams are very stable,” he said. “The opportunity for us at this time is that we sell gas into a number of fixed-price long-term contracts, and that of course is an advantage to us at a time of uncertainty around oil prices.”

“In some respects, we’ve assumed the characteristics of a utility company where pricing is very stable on a future basis,” Gamba elaborated. “Investors like the stability of the company, and they like the geographic and commodity focus.”

Looking ahead, Gamba highlighted a concrete plan to grow Canacol by developing new markets within Colombia. Currently, the company is building its gas production output through new pipeline projects—the first with a view to serving consumers in the city of Medellín, the second largest city in the South American nation.

“The plan now is to continue building our gas reserve space through exploration drilling and continue building our gas production through new pipelines to connect our gas fields to new consumers,” Gamba explained. “We’re really focused on our asset base and then looking for a new market to sell our gas to starting in 2022, which will essentially increase our production by about 33% in the following three years.

“Once we’ve completed that project, we’ll move to another pipeline project for 2025. It’s a really a case of launching new drilling operations to increase reserves, finding buyers for those reserves, and then connecting the buyers to the reserves with a new pipeline. That’s a three-year cycle, and each one of those cycles results in an increase of about 33% in production level and cash flow.”

Gamba has also worked on reducing operating costs at Canacol by measuring the company’s yearly budget forecast on a rigorous biweekly basis to identify actual costs versus forecasts and ensure that operations come in at or below that number, either by changing business processes or deploying cutting edge technology. “We identify the key areas in our operations and bring in outside consultants who specialize in the analysis of oil and gas to benchmark the key variables and identify areas where we can lower costs,” Gamba said. “Last year, our goal was to reduce our operating costs by 25%, and we reduced them by 35% that way. This year, the goal is 10%, and I think we’ll achieve it.”

Canacol procures the majority of its pipeline and gas processing equipment from the US, Canada, and Argentina, while it has also built a number of strategic partner- ships with Colombian service providers, to provide a diverse and flexible supply chain. Gamba cited an increasingly important partnership with Houston-based FlexSteel Pipe, a boutique manufacturer of spool tubing which enables Canacol to order tubing for pipelines at very short notice and represents an important new technology in the sector.

“We were the first people to deploy that technology here in Colombia,” Gamba said. “I think we’re leading the industry on some of those strategic initiatives. I’d really point to our strategic partnerships, our financial planning, and the way we have restructured the company to prepare for the future as crucial drivers in the growth of the company.”