Recent data regarding economic growth points towards weakness and for the world’s second largest economy… but also opportunity in other areas.

China’s economic growth slowed down to a 28-year low, according to data from the National Bureau of Statistics of China, but the country’s gross domestic product (GDP) grew by 6.6% in 2018, which was great news for U.S. and European perspectives, but represented a very low for the standards for the previously booming Chinese economy, where 6.6% represents the lowest growth rate since 1990.

According to Statista, lackluster domestic demand paired with the cooling effects of the trade war with the U.S. on exports contributed to the slowdown, continuing a downward trend that has been going on for several years now (with 2017 being a surprise exception).

Generally speaking, the national economy of China performed within an appropriate range during 2018, maintaining the general stable momentum by pursuing progress while ensuring stability. However, at the same time, the stable economic performance is under threat as the external environment becomes complicated and severe.

The economy faces downward pressure, and concerns over the changes have haunted international corporations during 2019 to consider the Chinese market a key one for reaching their own growth targets, but not all is lost, as there are industries where the country can continue to thrive. Retail, for instance.

According to eMarketer’s latest worldwide retail and ecommerce forecast, China is poised to become the world’s top retail market of this year, surpassing the U.S. by more than $100 billion. A company forecast predicts China’s total retail sales will grow 7.5% to $5.636 trillion in 2019. In contrast, U.S. retail sales are expected to grow 3.3%, reaching $5.529 trillion.

Although growth rates are slowing for both countries, China’s rate aims to exceed that of the U.S. through 2022. Everything speeds up in the digital economy, and nowhere is that more evident than in China. Read more on the topic here.

Click here to see the top trends shaping the retail industry for 2019. 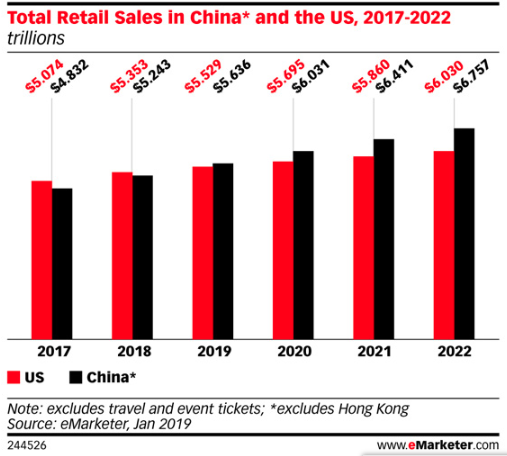