Who do you admire?

YouGov released its latest rankings of the most admired people in the world.

On the women’s list, Michelle Obama was followed by lawyer and jurist Ruth Bader Ginsburg with First Lady Melania Trump rounding off the top-three. Ellen Degeneres and Queen Elizabeth II complete the top 5 most admired women in the United States.

Three of the Democratic presidential contenders also make it onto America’s Most Admired list of 2019: Joe Biden is the 6th most admired man in the U.S., followed by Bernie Sanders in the 7th spot. Elizabeth Warren also made the list, as the 13th most admired woman in the country. 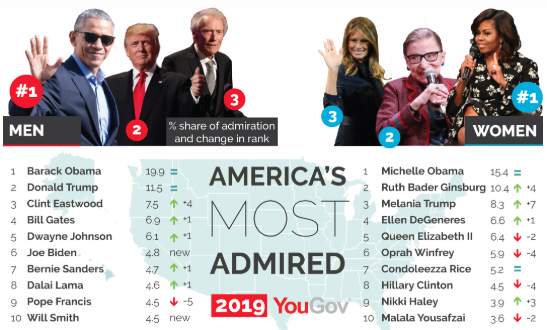 The 2019 study expanded to cover the views of people in 41 countries – the most ever – with more than 42,000 people being interviewed to compile the world list of admiration.

The results showed that Michel Obama and Oprah Winfrey are the top two admired women in the world, while Bill Gates –who’s topped the list every time YouGov has conducted the survey– is joined by Barack Obama as the two most admired men worldwide. In fact, the top five men remain unchanged since last year.

Entertainers dominate the female list, with 12 of the most admired women being actresses, singers or TV presenters (although some, like Emma Watson and Angelina Jolie, are also notable for their humanitarian work). By contrast, the list of most admired men contains more people from political, business and sporting backgrounds.

“There is an innocence in admiration: it occurs in one who has not yet realized that they might one day be admired.” ― Friedrich Wilhelm Nietzsche 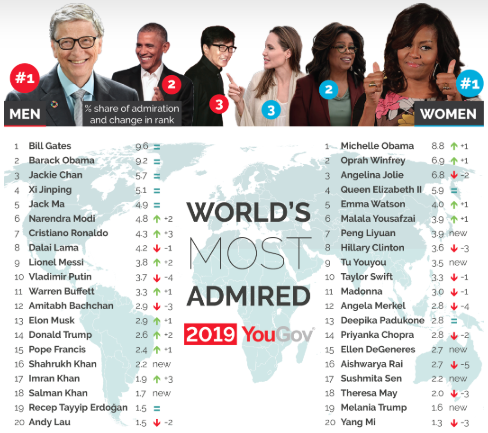