Stanley Kubrick: Around the world

Since 2004, the celebrated filmmaker’s unique vision has been touring cities around the world.

To call Stanley Kubrick a perfectionist is putting it mildly. In The Shining (1980), Jack Torrance, played by Jack Nicholson, spends his days supposedly writing his novel in the isolated Overlook Hotel, but actually descending into madness. Kubrick recorded the sound of a typist hammering out the words “All work and no play makes Jack a dull boy”, because he thought the sound each key made on a typewriter was slightly different and he wanted complete accuracy.

To make sure that the line was as effective in foreign versions, Kubrick painstakingly translated it into idiomatic German, French, Spanish, and Italian, and re-shot the scene, placing the translations in the typewriter for Jack’s wife Wendy (played by Shelley Duvall) to find.

The typewriter that Nicholson used is part of the display at an exhibition to mark the 20th anniversary of Kubrick’s death. It is one of 700 objects that tell stories from his five-decade-long career and offer insights into his filmmaking process. It underlines Kubrick’s passion for detail: he obsessed over everything from the scripts, the casting, the music, and the camera lenses to the props, the costumes and the editing.

“Nothing is cut without me”, he once said. “I cut everything to the bone.”

The Stanley Kubrick Exhibition Tour has already crossed the Americas (San Francisco, LA, Toronto, Monterrey, Mexico; and São Paulo), several countries in Europe, and reached as far away as Melbourne, Australia, as the globe pays tribute to one of the most unique filmmakers in the history of world cinema.

The Shining was famed for its incessant takes. In the end, almost 400 kilometers of film was shot, which unsurprisingly took its toll on the actors. Duvall suffered from stress-related hair loss and nervous exhaustion throughout filming. The process would produce near-delirious performances from her and Nicholson: perhaps the result Kubrick had intended.

Kubrick wanted each of his films to be a self-contained world built from scratch. To create this semblance of authenticity, he collaborated with the leading designers of his generation, including Saul Bass, Eliot Noyes, Ken Adam, and Milena Canonero.

Ken Adam—also known for his James Bond sets—built the War Room for Dr Strange-Love (1964) and won an Oscar for his design for Barry Lyndon (1975), which he’d agreed to work on only very reluctantly a er Kubrick twisted his arm. “It was almost like an unhealthy love affair between us”, Adam later said. “And I had a breakdown eventually.” Other masters of their art had a similarly turbulent relationship with Kubrick. Saul Bass, who had created posters for everyone from Hitchcock to Otto Preminger, had a series of poster designs for The Shining rejected, with Kubrick scrawling across each in turn: “too irrelevant”, “hard to read”, “looks like a science fiction film.”

The entrance to the Kubrick exhibition is carpeted by a replica of the hexagonal geometric design of the hotel from The Shining, created especially for the event. Visitors walk down a one-point perspective corridor (based on Kubrick’s camera technique, which sets only one vanishing point on the horizon so that the viewer adopts the character’s point of view), completely immersed in some of the most memorable scenes from his career. Then they are led through a series of themed rooms based first on his filming and editing methods, and then on his films, including armored suits from Spartacus (1960), and 2001: A Space Odyssey (1968), complete with floating baby. A master- piece of design, the effect is very much like walking through Kubrick’s mind. 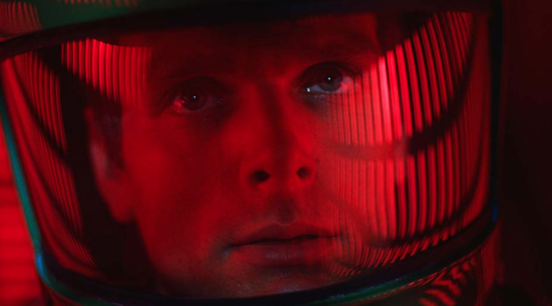 Here are some other highlights from the exhibition:

“There is a sexiness to beautiful machines,” Kubrick once said. The car driven by the Droogs, a violent gang of yobs in A Clockwork Orange, was definitely sexy. It was designed by Denis and Peter Adams two years before Kubrick’s film came out in 1971; they described it as “an investigation into extremes of styling.” Fittingly, its sleek orange body could only be entered via a sliding glass door on the roof. Though it looked futuristic, the car was actually made with wood rather than metal, using traditional techniques. Only three of the cars were ever manufactured, making it one of the rarest models in the world.

Kubrick desperately wanted to shoot the interior scenes of Barry Lyndon, based on William Makepeace Thackeray’s novel (1844) about the rise and fall of an Irish social climber, by candlelight. But his cameras weren’t sensitive enough to pick up their feeble light. So, he sourced and modified a lens that NASA made in 1966 to take shots of the dark side of the moon. The shutter speed of the lens was one of the fastest in history. It permitted Kubrick to shoot scenes that looked as if they were painted by Hogarth, an 18th-century artist whose candlelight-bathed paintings were an inspirational touchstone for the film.

The twins’ outfits in “The Shining” 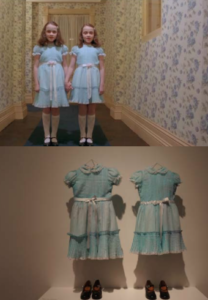 Twins do not appear in the Stephen King novel on which The Shining was based, but Kubrick’s assistant, Leon Vitali, suggested Kubrick write them in anyway. Thankfully, he listened. In their matching Mary Janes and blue frilly dresses, designed by Milena Canonero, they are two of the most sinister figures in the film. They owe something of their mystery to Diane Arbus’s unnerving photograph, “Identical Twins, Roselle, New Jersey” (1967), which Kubrick saw in a retrospective of her work at the Museum of Modern Art in New York in 1972.

Measuring 12 x 3 meters, the centrifuge was the revolving drum that formed the main compartment of Discovery, the spaceship in 2001: A Space Odyssey. It took six months to build and cost more than $730,000, the equivalent of more than $10 million today. The design was inspired by a model of a space station in the form of a giant ferris wheel devised in the 1950s by Willy Ley, a science writer, with the help of Wernher von Braun, a German rocket scientist. The first scene set inside Discovery depicts astronaut Frank Poole, played by Gary Lockwood, defying gravity by jogging on the curved wall of a room in the shape of a giant frisbee. To create this optical illusion, Lockwood ran in place while the whole wheel rotated underfoot. Lockwood’s co-star, Keir Dullea, thought the set was “better than Disneyland.”

A woman, practically naked except for the golden mask concealing her face, escorts him to a large room filled with a host of cloaked people who surround a mysterious figure known only as Red Cloak. The camera zooms in to inspect their gilded, twisted masks. With plumes of feathers, lacquered surfaces and expressive, delicately painted mouths, each is a small masterpiece of craftsmanship. Made by Ca’ Macana, a Venetian mask-making company that also designed the masks worn in Fifty Shades of Grey, they are, like so many of the exhibition pieces, emblematic of Kubrick’s obsession with detail.