The right business ecosystems can mitigate or negate the effects of structural obstacles to business building for Black business owners—and add $290 billion in business equity.

Entrepreneurship and business ownership—particularly of community-based businesses—are crucial ways to develop community wealth, for both business owners and the people they employ. Healthy Black-owned businesses could be a critical component for closing the United States’ Black–white wealth gap, which we project will cost the economy $1 trillion to $1.5 trillion (in 2018 dollars) per year by 2028. The COVID-19 crisis, however, has further stressed Black-owned businesses and may cause the racial wealth gap to widen. This gap includes a $290 billion—and growing—opportunity to grow overall wealth by achieving revenue parity between Black- and white-owned businesses in addition to providing aid to small and medium-size businesses (SMBs)—those with up to 500 employees—with nonwhite owners.

Black business owners have been disproportionately affected by the pandemic-linked economic downturn, partly because they were more likely to already be in a precarious position, including more likely to be located in communities with business environments that are more likely to produce poor business outcomes. Indeed, about 58 percent of Black-owned businesses were at risk of financial distress before the pandemic, compared with about 27 percent of white-owned businesses. The pandemic contributed to tipping 41 percent of Black-owned US businesses into closure from February to April 2020. More than 50 percent of the owners of surviving Black businesses surveyed in May reported being very or extremely concerned about the viability of their businesses. This concern may be linked to having a more difficult time accessing credit since the COVID-19 crisis began; 36 percent of Black business owners responding to the survey said they had experienced this, compared with 29 percent of all respondents. 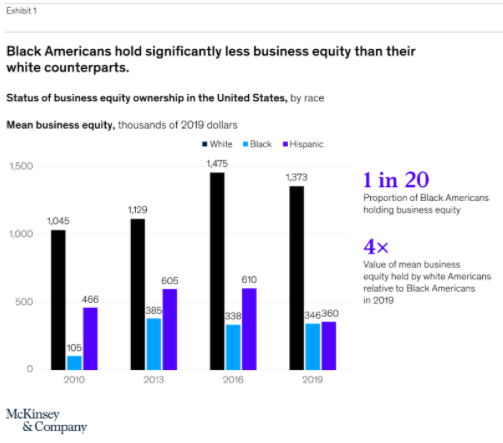 Black-owned businesses also tend to earn lower revenues in most industries and are overrepresented in low-growth, low-revenue industries such as food service and accommodations.

This gap in business activity contributes to an overall lower level of prosperity for Black families: the median white family’s wealth is more than ten times the wealth of the median Black family’s. This disparity is also a lost opportunity for the US economy as a whole. If existing Black-owned businesses reached the same average revenue as their white-owned industry counterparts (excluding publicly held companies), the result would be an additional $200 billion in recurring direct revenues, which could equal about $190 billion in additional GDP, or a roughly 1 percent increase in 2017 GDP. (For our analytical approach, see sidebar “Quantifying the impact of revenue parity.”)

Before the pandemic, the average American held 15.3 percent of his or her wealth in business equity, with a mean value of $147,000. SMBs constituted 99 percent of US businesses and were responsible for 62 percent of the net increase in private-sector jobs from 1993 to 2017. Entrepreneurship and an ability to start new businesses matter significantly here, as more than 50 percent of this net increase was the result of the formation of new businesses, defined as those less than 3.5 years old.

We focus here on the systemic barriers that hinder Black entrepreneurs’ efforts to ideate and start and sustain local businesses—that is, community-based SMBs that are part of existing supply chains. We then outline interventions that can counteract the effects of these obstacles, particularly opportunities for coordinated efforts. Indeed, US institutions need to repair Black business owners’ trust in the business ecosystem—particularly in companies in financial and business services. This historic lack of trust may be slowing business creation; research shows that Black business owners may believe that they need to be better qualified than their white counterparts: 30 percent of Black owners of employer firms (businesses with at least one paid employee) hold an advanced degree, which is true of 22 percent of their white peers.

A silver lining of COVID-19 and the racially charged violence in 2020 may end up being that some large companies have now launched programs to support Black-owned businesses: a major social media company dedicated $40 million in grants to support Black-owned US businesses with 50 or fewer employees; a financial services firm pledged $1.15 billion, including $350 million in procurement spending on Black-owned businesses, to close the racial wealth gap. However, these individual actions will not in themselves be enough to effect the needed change. For this work to have a systemic impact, entire business ecosystems will need to be involved. Once successful, however, this effort would benefit not only the US economy but US society as a whole.

By making social and economic institutions supportive of a wider swath of people, stakeholders can rectify the mistrust that has developed between Black entrepreneurs and institutions. That restorative effect, along with economic gains, could be a step forward for US society.

Mobility In the Eye of the Storm

Can Resilience Shape a Shifting Landscape?

What a Divided Government Means for Business

A C-Suite United on Cyber-Ready Futures