Entergy is working to prove its new customer centric business strategy with CEO Leo Denault at the top.

When Leo Denault was appointed Chairman and CEO of Entergy Corporation in 2013, the company was on the cusp of a significant shift in its business strategy: firstly, the primary focus of Entergy’s business strategy would move from a merchant wholesale business to focus squarely on its utility footprint in the Gulf South. Secondly, Denault set his sights on reinventing the landscape as it related to the company’s interaction with customers amid changing expectations, employing the technology, data, and analytics to both meet and surpass those expectations.

“There were a lot of dynamics in commodity markets in the period between 2008 and 2013, when I took on the role,” Denault elaborated in an exclusive interview with CEO Magazine. “Given the fall in commodity prices, we saw it as a great opportunity to double down our efforts on the utility business itself, free up capital, and really invest in the Gulf South. We were also beginning to see a significant amount of economic activity in the petrochemical and chemical commodity space, primarily in Louisiana and Texas, which was pretty unique nationwide.”

Headquartered in New Orleans, Entergy Corporation is a Fortune 500 integrated energy company engaged primarily in electric power production and retail distribution operations in the Deep South of the United States. Entergy generates and distributes electric power to 2.9 million customers in Arkansas, Louisiana, Mississippi, and Texas. In 2019, the company boasted revenues of nearly $11 billion.

“I think we currently have one of the best positions in our industry,” Denault elaborated on Entergy’s present standing. “If you look at who we are and where we’re located in terms of our legacy positions, we have some of the lowest–if not the lowest–rates in the US, one of the cleanest large scale generating fleets, and some of the most constructive regulatory mechanisms, which affords us the ability to maintain financial flexibility and invest on behalf of our customers.” 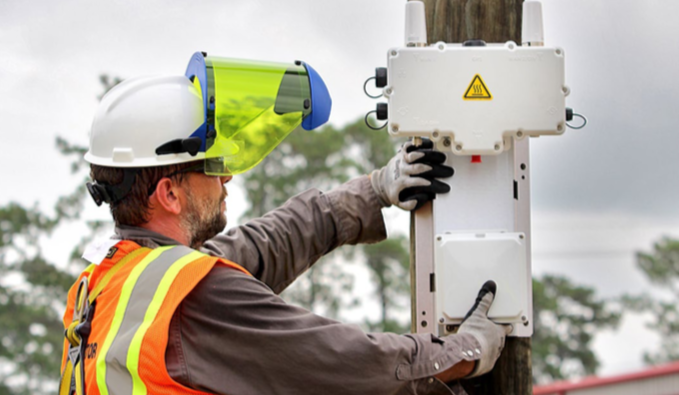 Amid the company’s current strategy of switching to a purely utility focus, Leo Denault highlighted a number of factors that will aid Entergy Corporation along the way: the benefit of one of the only growing industrial bases in the US, an ability to invest across the company’s infrastructure, modernizing its generation fleet with a view to making it more efficient, lower cost, and cleaner; as well as a move to improve its transmission and distribution systems through technology to both relieve congestion and increase efficiencies.

“We’re in the midst of building new gas and renewable power plants and we’re retiring older gas plants and ultimately, by the end of the decade, some of our coal facilities, as well as developing new transmission lines in distribution technology,” Denault explained. “That near-term investment will drive growth in the business while we improve the reliability of the system, improve the environmental footprint, and make our customers better off. It’s a great one-to-five year strategy that we’ve been using for some time now, and it’s served us really well in the earnings growth and what you’ve seen in stock price appreciation.”

Yet for Denault, perhaps the most important change currently underway at Entergy is enhancing customer solutions with a focus on shifting the company’s emphasis away from the input of providing electricity to the physical outcomes that customers desire, a strategy he views as a game changer in terms of the way the company identifies opportunities to invest.

“To put it simply, you don’t wake up and decide that you’re going to buy electricity,” Denault elaborated. “If you’re a resident in your home, you want to be warm, dry, have enough light, be comfortable. If you’re a commercial establishment, the outcome you desire is low cost lighting, heating, AC, or freezers and refrigeration units in your store. You may also have profit and loss, safety, and sustainability objectives. We’ve found that when we take that viewpoint we come up with ideas about ways of how to make customers’ outcomes come true that give us the opportunity to invest in things that we wouldn’t have thought of if we were just looking at providing them with electricity. To this end, we’ve created an innovation center we call Keystring Labs and through that we’re doing a significant amount of ethnographic research with our customers to determine the outcomes they want.”

By way of example, Denault pointed to the needs of Entergy’s customers who use the port facilities in the Gulf of Mexico, where six of the fifteen largest ports in the US are located. Denault highlighted that such companies have a need to be low cost, environmentally sustainable, and provide reliable service, yet one of the most costly elements of shipping in the region has been the necessity to use diesel to light their vessels while they are docked.

“We’re working with the ports and the shipping companies to electrify those ports, to provide them not only a lower cost and more efficient way to remain in dock, but also significant environmental benefits when you look at the difference in emissions as a result,” he explained. “A cruise ship in the port of New Orleans probably emits about 1500 pounds of CO2 per megawatt hour. By the time we hit our 2030 sustainability objective, we will have enabled them to emit less than 300 pounds per megawatt hour equivalent. It’s a significant environmental benefit.”

Denault identified three main strategic pillars he believes will help Entergy Corporation meet its objectives in terms of customer satisfaction, productivity, and efficiency. The first is the customer centric strategy already mentioned; the second, a philosophy of continuous improvement that runs throughout the company. The third pillar, for Denault, is a culture of diversity, inclusion, and belonging, which he believes is the engine that makes the rest of those achievements possible.

“In the continuous improvement arena we’re looking across the entire organization to create the opportunity for us to drive productivity, improvements, and efficiencies through what amounts to a consulting arm within the corporation,” Denault highlighted. “To this end, we’ve created a center of excellence called Corporate Business Services which houses key functions, taking them out of areas like Accounting and HR and other functional areas and putting them into an end-to-end process. Supply chain, which is critical to every function of the business, and our IT function, particularly as we move more and more towards digital, are part of that shared service function.”

“The third pillar, which is really what’s going to make us sustainable, is that our workforce has to continue to evolve,” he added. “If we’re going to be closer to our customer, we have to be more reflective of that customer base. Our employees have to understand you because they look like you, because they’ve had the same experience. We’ve got to be a more diverse organization if we want to succeed in a customer centric environment. That diversity of expertise, thought, and experience requires us to have a workforce that’s representative of the communities in which we operate.” 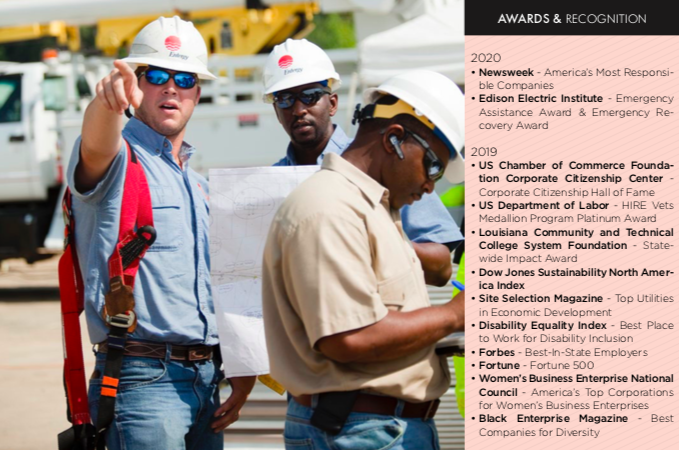 Entergy’s supply chain is also evolving as part of its new shift in focus. The company procures a broad range of materials from the equipment that goes into large-scale generation and nuclear power plants to increasingly tech-oriented products and services relating to data analysis and analytics. As a result, Denault stressed the importance of maintaining great relationships with suppliers, as well as ensuring its partners share the same values of customer centricity, sustainability, and diversity.

He highlighted the example of Entergy’s recent buildout of three cyclo gas turbine power plants, the first of which went online last year and which, combined, will reduce the company’s carbon footprint by 40%. “You see a lot of people building one plant and then building another, and frequently they come online over budget, behind schedule, or not at all,” Denault said. “We leveraged these three facilities I mentioned across the same EPC contractors, the same equipment suppliers, the same labor force, and we’ve been able to bring the first one online ahead of schedule and under budget. We expect the same from the others”

Ultimately, Denault believes that the key to Entergy fulfilling its strategic objectives is vision and long-term planning, given that the company started out on the path to customer centricity, sustainability, and the strengthening of efficiencies long before many other players in the industry, creating a strong foundation for the innovative measures currently being implemented.

“When I go out and meet with customers and they tell me they want a high bill alert and I put in place automated metering so I can tell them exactly how much electricity they’ve consumed, I’m providing them and how they can lower their cost,” Denault added. “That’s a different level of engagement with the customer, and really a game changer for this company and this industry.”