How China is striving to be the next 5G leader

After missing out on the opportunity to set the standard for 4G, China is sprinting ahead to establish itself as the leader of 5G deployment and experimentation.

There is increasing demand for 5G’s potential to enable emerging technologies like autonomous driving, health tech and virtual and augmented reality.

The country’s top three telecom operators launched their 5G services at scale in November 2019, making China one of the first countries to do so. Here are five reasons why the country is well-prepared to be the next 5G leader.

Consumers are Enthusiastic About the Next-Gen Wireless Technology

According to a recent GSMA study, consumers in China are the most willing to pay more for having 5G services among respondents worldwide.

And the number of 4G vs. 5G connections in China will reach near-equilibrium by 2025, which translates to 807 million 5G connections, per GSMA. 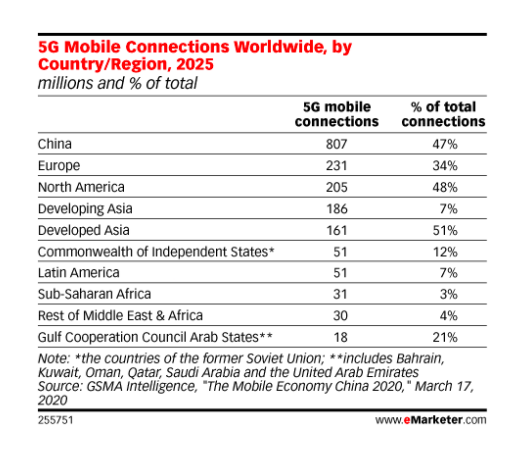 The Government Is Investing Heavily in 5G Infrastructure

The Chinese government has already invested heavily in 5G deployment in certain regions: The Ministry of Industries and Information Technology announced that 130,000 5G base stations have been built by the end of 2019. Within parts of Beijing, “gapless” 5G coverage is already available.

Earlier this year, China said that it wanted to expand 5G coverage from 50 cities to all its more than 300 prefecture-level cities by the end of 2020. The recently announced COVID-19 stimulus package—which focuses on investments in next-generation tech and services, including 5G—will likely accelerate the effort.

The experience enhancement of 5G on mobile is less pronounced compared with the dramatic speed improvement 4G had over 3G, for example. For 5G to be used to its full potential, its application needs to be used far beyond video. In China, the government and private companies have begun putting 5G to the test.

Chinese tech companies like JD.com and CloudMinds have used the coronavirus outbreak as a springboard for launching new 5G-based initiatives like service robots, unmanned vehicles and drones to eliminate human-to-human contact or deliver supplies. Several hospitals in the city of Wuhan were also using 5G networks for remote diagnosis during the height of the outbreak.

Separately, a pilot zone in Chongqing has been set up to test 5G-backed remote driving, where driverless cars can be steered remotely, and the technology is currently being showcased at trade shows countrywide.

On November 1, 2019, China’s top three operators—China Mobile, China Telecom and China Unicom—launched 5G at scale. Since then, China Mobile has gained substantial numbers of 5G subscribers—all of which happened during the coronavirus outbreak—reaching 43.7 million as of April vs. just 6.7 million in January. And rival China Telecom reported 21.7 million 5G subscribers in the same period, putting the total 5G subscribers among the two telecom giants at 65.4 million. (China Unicom, however, has been mute about its own figures.)

According to ABI Research, 5G mobile connections in China (143 million) will eclipse that of the US by the end of 2020, which is no surprise, given that China’s population is more than four times that of the US. Based on these estimates, 5G penetration will be higher in China than in the US as a percentage of the overall populations of both countries.

Many popular phone brands in China, including Huawei, Oppo and Vivo, have already rolled out 5G mobile phones. Huawei reportedly sold 6.9 million 5G smartphones last year. Apple is speculated to launch a 5G phone this year, which will boost demand in China further.