For World Population Day, a look at the countries with the biggest projected gains – and losses – by 2100, according to Pew Research Center.

Brazil, Bangladesh, Russia and Mexico are among the world’s 10 most populous countries today, but come 2100, they are projected to be overtaken by the Democratic Republic of the Congo, Ethiopia, Tanzania and Egypt – none of which are currently in the top 10.

According to recently released population projections from the United Nations, 8 of the 10 countries that are expected to gain the most people by 2100 are in Africa: Nigeria (with the largest gain, 527 million), the Democratic Republic of the Congo, Tanzania, Ethiopia, Angola, Niger, Egypt and Sudan. The two non-African nations on this list are Pakistan and the United States, which are projected to see population gains of 182 million and 103 million people, respectively. Of the six countries that are projected to account for more than half of all world population growth by 2100, five are in Africa. Half the world’s babies will be born in Africa by 2100, up from three-in-ten today.

Here’s how the list of the 10 most populous countries in the world has changed since 1950 – and how it is projected to change again by 2100, according to a Pew Research Center analysis: 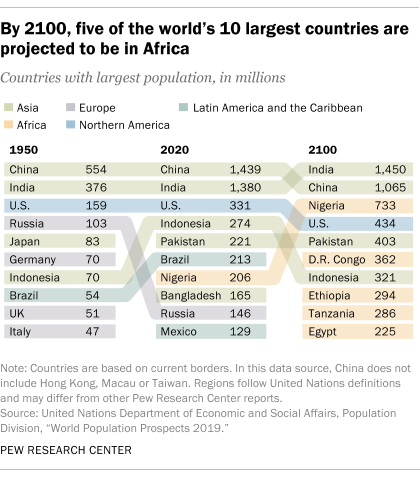 Here are 11 key takeaways from the UN’s “World Population Prospects 2019”: 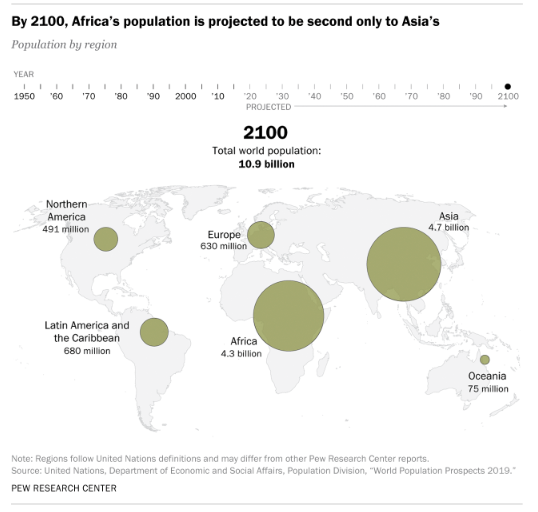