As investors rush to buy into the fast-growing Chinese fintech giant despite risks of greater scrutiny at home and abroad, Ant Group Co Ltd is poised to raise up to $34.4 billion in the world’s largest stock market debut, with a dual listing at about $312 billion before a so-called greenshoe option for a 15% overallotment of shares, a first for Shanghai’s Nasdaq-style STAR Market and Hong Kong. Jack Ma, the billionaire founder of Ant and affiliate Alibaba Group Holding, said it was a “miracle” that such a large listing is taking place outside New York.

According to Reuters, Ant shares are expected to start trading in Hong Kong and Shanghai on Nov. 5, two days after the U.S. election. The company set the price tag for the Shanghai leg of the listing at 68.8 yuan ($10.27) per share and HK$80 ($10.32) per share for the Hong Kong tranche, the exchange filings showed. 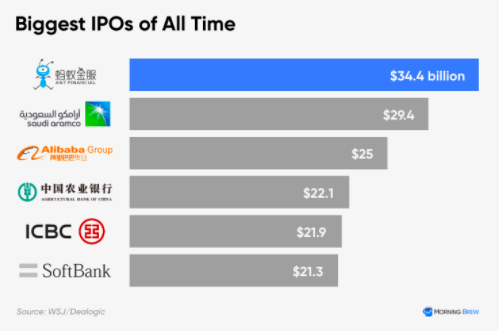