Donald Trump and his administration recently released its budget proposal for 2020.

Ahead of 2020, Trump’s administration is going after Medicare, Social Security, Medicaid, and more.

This third budget proposal presented Monday, cements a vision for the United States that bolsters funding for defense and border walls, while severely cutting social programs for the nation’s poorest.

According to Vox, the $4.7 trillion budget proposal, which encompasses everything from funding for food aid, education, and health care to national defense, seeks to slash $845 billion from Medicare — a program Trump notably promised to leave untouched — cut from Medicaid through major structural reforms, as well as a 9% cut across non-defense programs, all while increasing the defense budget to $750 billion, 5% more than the 2019 budget.

President Trump has also requested $8.6 billion in funding for barriers along the U.S.-Mexico border, a project that made the president declare a national emergency over earlier this year amid the nation’s longest government shutdown in history.

A core part of Trump’s budget is the assumption that the economy will continue to grow — and rapidly.

While the Congressional Budget Office predicts growth will sit between 1.6 and 1.8% over the next decade, and the Federal Reserve settled around 2% annual growth, the Trump administration says growth will surpass 3% this year, then level out at around 2.8% by 2029. 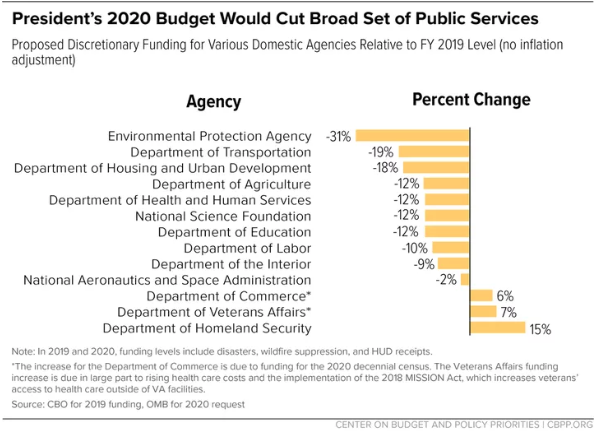