60 minutes on the Internet

What happens on the web in one minute? Much more than what you think.

A minute on the web might mean a quick login into Facebook, a browse through Youtube videos, a quick email to an office colleague, or a small talk while a site is loading, and although we might believe 60 seconds might not be enough to do anything special, a whole minute on the World Wide Web means a TON of activity.

Half of the global population is online, as of 2018, there was an estimated 3.9 billion Internet users worldwide, the majority of them coming from China (829 million), followed by India (560 million) and the United States (293 million). With this giant universe it could result impossible to breakdown the activity on the web during a whole minute, but Visual Capitalist compiled this data.

A single internet minute in 2019 holds:

Incredibly dynamic, fast, changing and defiant, the web is that and much more, resulting quite fascinating to see the number of actions packed into just 60 seconds. However, as immediate and quick that the Internet is, every year there is a changing map to what happens while browsing, and an infographic from @LoriLewis and @OfficiallyChadd  reveals the comparison of a minute on the Internet in 2018 and a minute on the Internet during 2019. 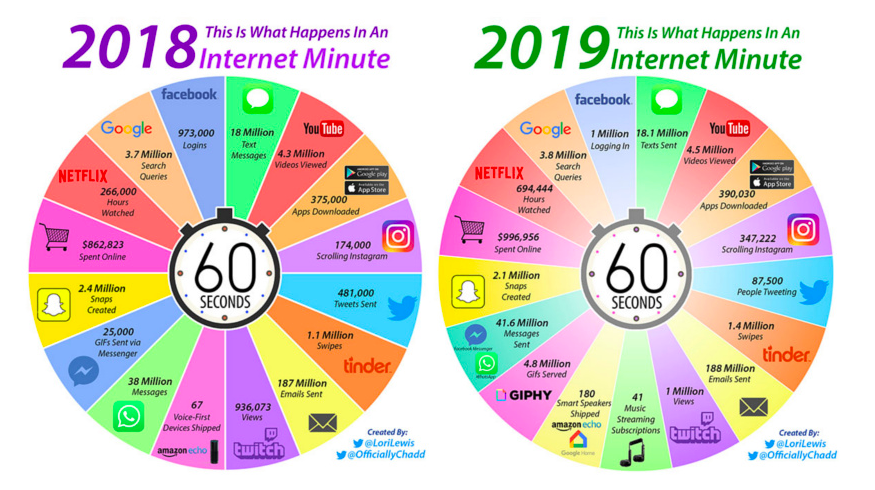 Instagram and Netflix continue to peak, while new categories such as smart speakers are quickly building a strong foundation for the future. Facebook logins and Google searches both increased only incrementally from last year. In 2018, only 67 voice-first devices were being shipped per minute – and in 2019, there are now 180 smart speakers being shipped in the same window of time.

What will this look like in 2020? By this time next year, an internet minute will have changed significantly yet again!

Click below to see the 20 countries with most Internet users in the world during 2019.