When Rodrigo Barbosa was appointed president and CEO of Aura Minerals in 2017, one of his first moves was to revolutionize the way employees collaborated with each other.

He began to do this in a range of ways from creating new open-plan offices to rethinking the way in which senior management interacted with lower-level staff. For Barbosa, it was a way of dismantling what he calls the “hierarchical” business structure that predominates in the mining industry and ultimately eliminate barriers between different levels of management.

“At other companies, you see employees and managers working for the senior managers so the latter can make decisions and run the company. I am trying to invert the pyramid and see how the senior managers can work for the medium managers to provide them with the right tools and environment so they can have more responsibility for decision making.”

Aura Minerals Inc. is a mid-tier gold and copper production company that focuses on the development and operation of gold and base metal projects throughout the Americas, including Brazil, Mexico, and Honduras. 2017, the year he was appointed, was a highly productive year for Aura with the company completing a merger with Canada’s Rio Novo Gold Inc. and selling its Serrote da Laje Copper Gold project in Alagoas, Brazil, for $40 million to finish the year with a net income of $158 million. Yet when Barbosa took over, he saw three key advantages that he could capitalize on to drive the company forward.

“When I was invited to take the post, I looked at all of the positives we had. Number one was the quality we have among management and the board. Number two was the potential for growth in the company, which has not performed so well over the past four years, but can really do much better in the next four. Finally, the size of Aura as a mid-tier company was very interesting. With a company this size, you can really have an impact on transforming its future.” 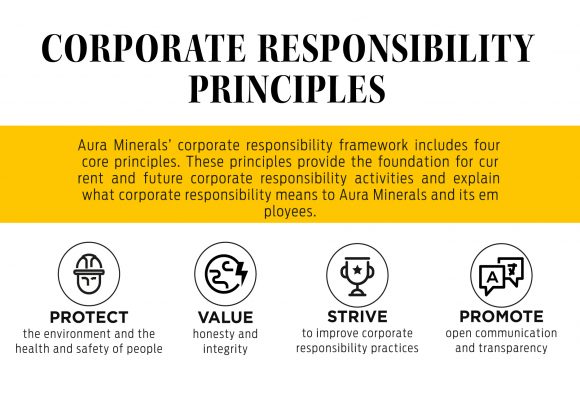 Building for the future

Furthermore, the recent merger with Rio Novo and the sale of Serrote da Laje have opened up a range of further possibilities that Barbosa believes will help the company grow rapidly in the coming years.

“These recent strategic moves have opened the opportunity for us to potentially more than double our size in the next three-to-four years and then hopefully do the same again in the next six-to-eight. In mining, you need three elements to grow: Projects, balance sheets, and teamwork, so we have put a lot of effort on the first two and this year we are focusing on the third one which is team management and culture (…) We are a commodity player, so basically, we sell everything that we produce. We don’t have a problem selling the product. The challenge is how we produce, at which standard of safety, and how we prepare ourselves to grow, invest in new projects and explore new opportunities.”

“To improve efficiency, we need to have more collaboration among the areas and among our operations. The biggest challenge for us right now is in board management. How we are making our decisions, who’s making which one, how we’re measuring our decision process, how we’re training our employees, do we have room for innovation, and how do we open opportunities for talent.”

Rodrigo Barbosa insists that in the mining industry, 70% of the effort is in planning and 30% execution and high performance comes precisely from the level of planning a company invests in.

Barbosa views this changing management culture at the company, which he has personally overseen, as key to the efficiency and future growth of Aura Minerals. Yet he believes this process has been slower to come to mining than to other industries.

“Mining is still generally, with some exceptions, lagging behind in terms of innovation, both in technology and in management, which is often much more meritocratic in other industries. That’s mostly how we want to differentiate ourselves, with high performance and the creation of a more innovative and fun environment for our young people to work.”

Moving from a more traditional office environment to We Work facilities with open-plan office space was a key example of this cultural shift, enabling what Barbosa believes was a much-needed integration of different levels of management, an approach he hopes to replicate within business units and the mines themselves.

“I don’t have my own room. None of our senior managers have their own room, we share the same space because that creates a good environment for integration. We also need to improve our talent management tools. How we manage our mid-level people, implementing 360-degree reviews so they know they will be evaluated, not only by their bosses, but also by their peers and those that work under them. How they interact, how they help the company, how they exchange information, will be highly watched by the performance committee of which I and other senior managers are taking part.” 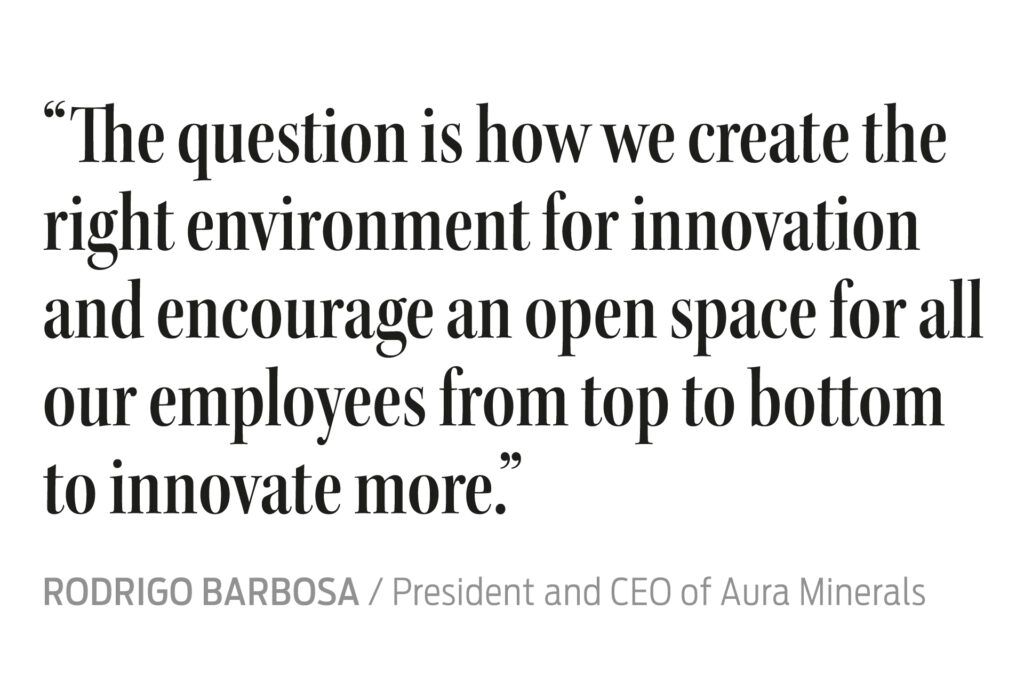 Barbosa views this breaking down of barriers as also involving Aura’s suppliers, explaining that key suppliers will this year be invited to participate in decision-making at the top level, stressing that as much as 30% of the company’s workforce consists of a third party and that learning from such partners is key.

He cited an example in which contractors in Brazil, which move materials from the mine to Aura’s plant, were recently invited to company meetings and contributed to the improving of the efficiency of the mine by over 10%, a strategy the company also plans to implement in Honduras and Mexico.

“We buy services from the main contractors that help us to operate our mines, but also specialized consultants that can bring knowledge—geological, geotechnical, or methodological knowledge. Managing our suppliers or contractors and managing our consultants’ knowledge is increasingly important to us (…) We have to disrupt the hierarchical way of management and create more room for innovation. Down the road, for example, electric cars will depend a lot on copper. That will be key for growth in the future. The question is how we create the right environment for innovation and encourage an open space for all our employees from top to bottom to innovate more.”

Barbosa ultimately sees an industry that needs to shake off many of its old habits and embrace innovation if it wants to forge ahead, and he firmly believes that Aura Minerals will be a market leader in this regard.