Online ads, the next frontier

During 2018, Internet advertising revenue in the US exceeded $100 billion for the first time.

The online advertising market shows no signs of slowing down as brands are shifting their budgets to match changes in media consumption, proving even more significant success in the transition from desktop to mobile, who actually, during 2018 accounted for 65% of total digital ad revenues, up from just 9% in 2012, according to Statista, closely matching consumer usage patterns: 71% of online time is spent on a mobile device.

Interestingly, the online advertising market is still highly concentrated, with the top 10 ad-selling companies accounting for 75% of revenues. Search and social media advertising accounts for 45 and 27% of total revenue. 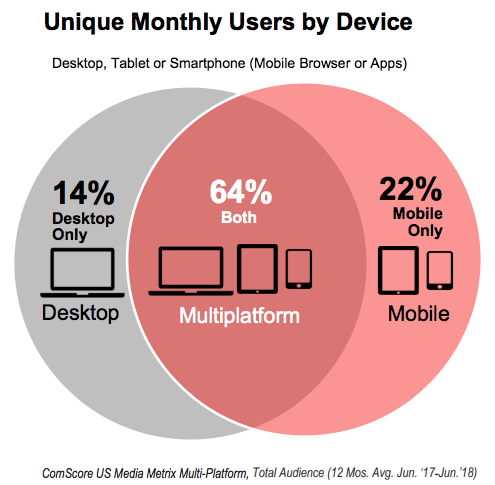 While the digital ad market is still dominated by Google and Facebook, who account for roughly 60% of total spending, the online retail behemoth, Amazon, has quietly built a billion-dollar ad business which is growing at a rate of 50% per year, turning the ad revolution into a a three-company challenge, erasing the de-facto duopoly established by Google and Facebook.

“It offers a major benefit to advertisers, especially CPG and direct-to-consumer [D2C] brands” (…) “The platform is rich with shoppers’ behavioral data for targeting and provides access to purchase data in real time. This type of access was once only available through the retail partner to share at their discretion. But with Amazon’s suite of sponsored ads, marketers have unprecedented access to the ‘shelves’ where consumers are shopping.”

Amazon has quietly built a billion-dollar ad business which is growing at a rate of 50% per year. 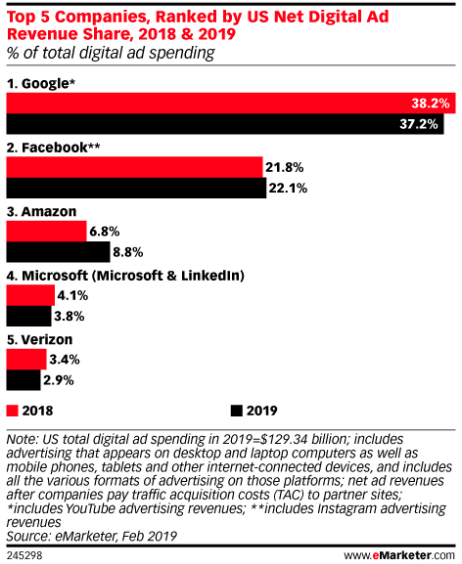 A major milestone in the world of advertising is happening: Digital ad spending will exceed traditional ad spending in the U.S. for the first time ever by 2023, with other media taking a hit.

TV ad spending is expected to decline 2.2% to $70.83 billion this year, largely because there are no elections or big events, such as the Olympics or World Cup.

eMarketer predicts that the presidential election next year will propel TV ad spending back into positive growth, before falling again in the following years, but directories, such as the Yellow Pages, will not be able to avoid a big hit—dropping 19% in 2019. Traditional print (newspapers and magazines) spending is a close second, as it is predicted to drop nearly 18%. Overall, traditional ad spending’s share in the US will drop to 45.8% in 2019, from 51.4% last year.