Entertainment and media: What’s going on?

PwC follows the pace of the vibrant industry that is media and entertainment.

The rise of the super competitors has created a deep-pocketed class of market participants that can buy content, invest in startups and serve as buyers for maturing businesses.

Convergence is all the rage again across entertainment and media (E&M), technology and telecommunications.

The thick borders that once separated these industries— and sectors within them—are dissolving. Large access providers and platform companies are integrating vertically, while established giants are integrating horizontally.

Companies that once offered only technology and distribution are moving into content. The distinctions between print and digital, video games and sports, wireless and fixed Internet access, pay TV and over-the-top (OTT), and social and traditional media are blurring.

Although they all had different starting points, many companies in this converged entertainment ecosystem are now aiming for business models that revolve around direct-to-consumer relationships. The transformation unfolding befo- re our eyes is enabling this vast global industry to keep growing at a pace close to its historical rate—even amid significant disruption. 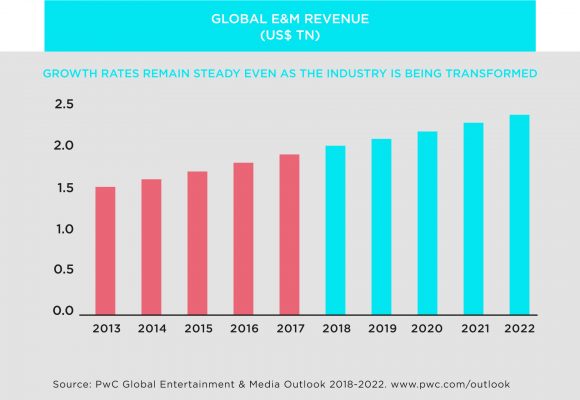 A deep dive into the data reveals something of a disjunction.

On the one hand, the overall volume of E&M spending continues to rise at a steady, reliable clip along with economic growth, placing the industry in the same bracket as consumer products and similar sectors.

On the other hand, beneath the seemingly placid top line, an immense amount of churn is taking place, with different subsectors and geographies on sharply different— and occasionally volatile—trajectories.

All this is contributing to players’ sense of an urgent need to rethink and reengineer their business models. At every point in the value chain, in every country, companies are having to reconsider precisely how and where they generate revenues and what role they play in the E&M ecosystem.

Given the prospect of such disruptions, it’s hardly surprising that building new revenue streams is at the top of the agenda for every player in the E&M industry, especially those that are currently reliant on advertising.

In fact, companies are exploring an expanding array of strategies to build new streams. Maximizing distribution reach by monetizing existing core brands, products and intellectual property through new channels and platforms, either owned and operated or accessed via partners.

CBS All Access, the television network’s subscription video service (offered with limited commercials for $5.99 per month or commercial-free for $9.99 per month), debuted in the fall of 2014. Powered by exclusive original series such as Star Trek: Discovery and The Good Fight (a spin-off of the popular CBS Network series The Good Wife), the video service has grown to 2.5m subscribers, adding approximately 500,000 in the last year.

Sky has created more than 1,200 audience segments—examples include ‘sports car fans’ and ‘luxury travelers’—that advertisers can target. Sky charges a significant premium for AdSmart ad units, up to eight times the rates for nonaddressable TV inventory.

Closing the loop between user engagement and commerce activity. Video game company Ubisoft, like its peers Activision, EA and Take-Two, has shifted its strategy from releasing annual blockbusters to reinventing franchises such as Assassin’s Creed and Tom Clancy’s Rainbow Six Siege as live digital servic3es.

In-game microtransactions, or what Ubisoft refers to as ‘recurring player investments,’ such as a $4.99 ‘unicorn mount’ for Assassin’s Creed players, grew 87% in FY2018, and now represent 27% of total company revenue.

Encouraging a membership mindset that allows a company to sell premium media experiences and related benefits, products and ser- vices. The New York Times Company saw its digital subscriptions soar from 910,000 in 2014 to 2.64m in 2017.

Tencent’s Riot Games has introduced a franchise structure for its North American League of Legends Championship Series (NA LCS). Activision has created a professional league around Overwatch. Electronic Arts is developing e-sports competitions for both its Madden and FIFA franchises.

Having grown tenfold between 2012 and 2017, international subscribers (62.8m) now exceed the company’s domestic subscribers (54.8m). Netflix curates content, in any language, that would appeal to the nearly 2,000 ‘taste communities’ it identified during the course of its global rollout.

Taste communities are groups of subscribers around the world who are fans of certain types of content, regardless of where they live.

As the drive to create new E&M business models continues, it’s clear that the pressure driving this wave of innovation—not least the squeeze on ad revenues—won’t ease off anytime soon. So, the reinvention has much further to go, and the industrywide move to tap into and develop new streams may have only just begun.

Ongoing advances in technology will be one of the main forces that aid in that effort.